Preventive Programme “A Generation without Caries”

The Clinic Aukštėja has been implementing the preventive programme “A Generation without Caries” for more than ten years.. Not only has it used preventive dental programmes developed by the Vestfold County Dental Health Centre in Norway, Danish NEXO, and German SOLO, but also original in-house developed methodologies. Their scientific basis is the monumental monograph entitled “Nutrition and Physical Degeneration” authored by Dr Weston Price as well as works by researchers from Loma Linda University (USA) Dr Ralph R. Steinman and Dr John Leonora, and discoveries in neurology and endocrinology that view caries as a systematic disorder.

Outputs of the US researcher Dr Steinman provided evidence that caries is not only an external lesion of a tooth resulting from acid-producing bacteria but rather an outcome of the systematic disorder in metabolism. This means that your oral health depends on the overall health of your body, which necessitates the involvement of a dental professional and other specialists and, most importantly, your motivation to participate in the treatment process.

DDS, MS Professor Dr Ralph R. Steinman from the Loma Linda University and professor of physiology, biophysics and endocrinology Dr John Leonora devoted 40 years to scientific research of metabolic interaction of oral cavity, teeth, and the entire body. Dentine is not solid but rather has multiple ducts and parallel enamel prisms. Dr Steinman proved that substances could enter the oral cavity with interstitial fluid via the pulp chamber, dentine ducts, and enamel.

He called this phenomenon the dentinal fluid transport and proved it to be the self-contained dental cleansing mechanism. Tests were carried out with mice, injecting radioactive Acriflavine Hydrochloride into the abdominal cavity. Six minutes later, the radioactive agent was discovered in dentine ducts and an hour later — in enamel.

Thanks to the flow of dentinal fluid, the continuous self-contained cleansing of a tooth protects it from microbe attachment to enamel and entrance into the tooth as well as eliminates the negative acidic effect of bacteria present in the oral cavity. At the same time, nutrients from the pulp chamber get into dentinal canals and create the environment necessary for regeneration. The regulation of this transport is determined by the hypothalamus and the endocrine part of parotid glands. Scientifically, this is referred to as hypothalamus–parotid gland endocrine axis. Odontoblasts — cells present in dental canals — pump the dentinal fluid. The key problems arise when inadequate nutrition, oxidative stress, and the lack of mineral and microelements negatively impact on the hypothalamus, which regulates the parotid gland, which is responsible for odontoblasts. Professor R. Steinman demonstrated that odontoblasts have a hormone-based and biochemical relationship to the metabolism of the entire body, consequently, it also affects the health and functioning of teeth. In the case of dysfunctional odontoblasts, the pressure of intra-dental fluid drops. Capillary phenomena reverse the flow of the fluid in the opposite direction and toxic substances from the mouth, or the surrounding periodontal tissues enter the pulp chamber causing the inflammatory response of the pulp. Shortly speaking, caries does not start developing from the demineralisation of enamel but is caused by the dysfunction of the hypothalamus, endocrine part of the parotid glands, odontoblasts, and, finally, tooth metabolism. Thus, caries prevention should not be firstly aimed at the external protection and cleaning of a tooth but rather at the restoration of the neuroendocrine function and homoeostasis. For example, Dr Steinman determined that enrichment of food with copper, iron and manganese compounds, which are necessary for the metabolism of odontoblasts, can significantly reduce the risk of caries development. 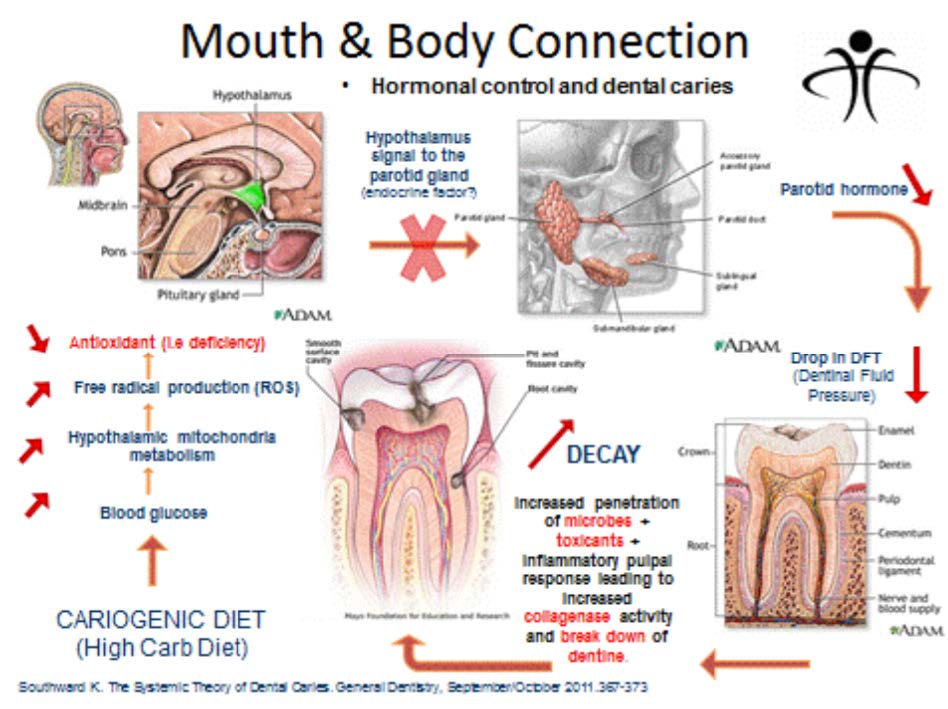 The following are seven most important factors that determine the oral health:

Specialists of the Clinic recommend having the professional oral hygiene procedure twice a year. It takes about one hour and is followed with the measuring of salivary pH, assessment of the neuroendocrine system, prescription of required minerals and microelements and provision of practical and exhaustive information on the holistic approach to health and treatment solutions. As mentioned before, these solutions are based on scientific outputs of researchers from the US, which have been tested in the clinical practice of the Clinic Aukštėja.

The preventive programme “A Generation without Caries” targets the oral health of children before they are even born. A tooth germ forms during pregnancy; thus, preventive care should start while planning a pregnancy, to ensure sufficient availability of nutrients and microelements. Special focus should be placed on oral and general health of the mother-to-be, which means appropriate nutrition, correction of minerals and microelements, and salivary pH. Later, children of all age groups are provided with individual, personal and professional oral hygiene procedures. Prenatal months and pre-primary school age are named as “the golden age” in the prevention of caries.

Healthy mouth and teeth are more than just a charming smile!